December was the start of summer here in Australia and it has already been very warm here in Queensland. We’ve only had a little rain so have had to keep checking the old pond and water dishes to ensure they are topped up for the birds and animals that visit. During the month I continued to be visited by all the different baby birds who are quickly growing up, and finally I got to see the baby kookaburras! And there was another new visitor during the month too!

First is an update on the Pied Currawongs. You can see the mother here in the photo below who is missing lots of feathers from the back of her neck and looking a little out of condition (as parents can be sometimes when trying to manage their little ones!).

She looks pretty harried, probably because she’s been left to raise the two young ones on her own. The father is still around but has nothing to do with them now. Here are the two babies, almost as big as their mum now but she is still feeding them. I have seen the young ones in the trees around the house practising singing already, and occasionally I see them playing with dead leaves which has been quite interesting to watch. 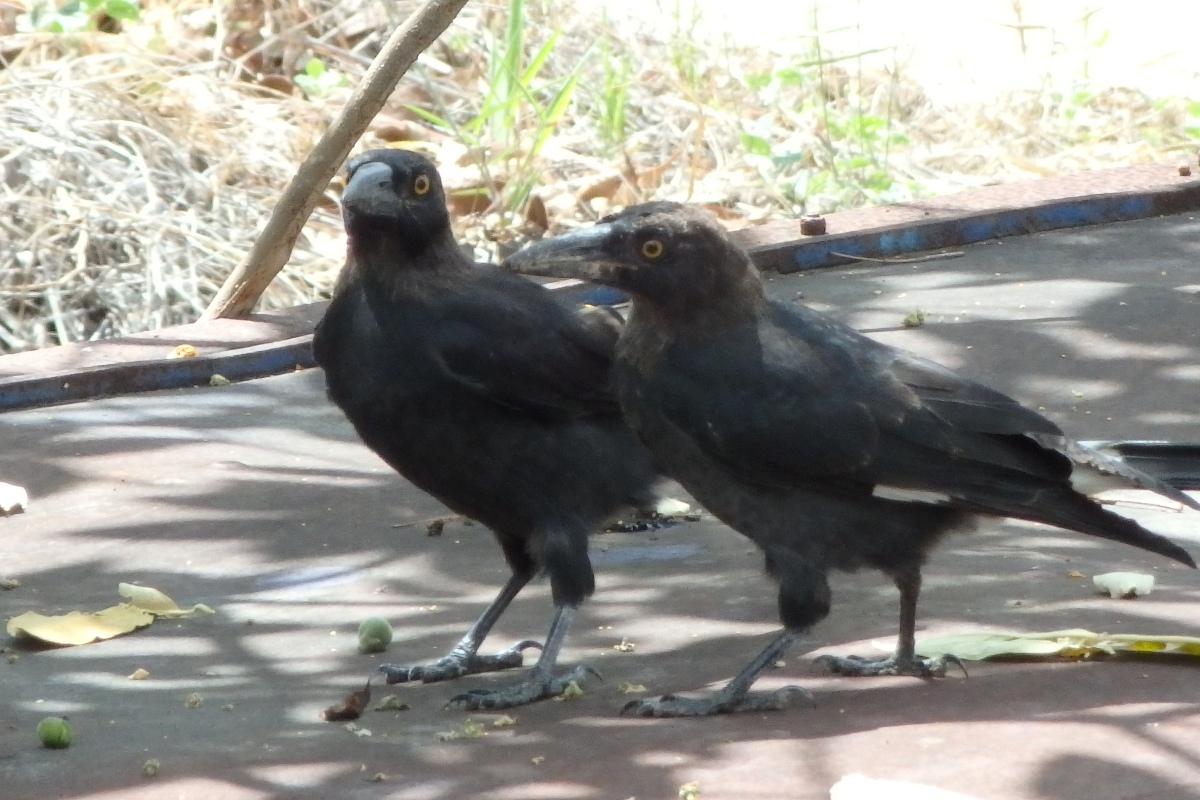 The Pied Butcherbirds are still a familiar sight, but I have seen a few aerial fights between them and the Grey Butcherbirds who seemed to have moved in on their territory. This is a photo of two adult Pied Butcherbirds, followed by the two juveniles who are now about 12 months old. You can see that the juveniles are starting to get darker in colour now and soon they will look black and white like their parents. Note how each juvenile is darkening in different areas. 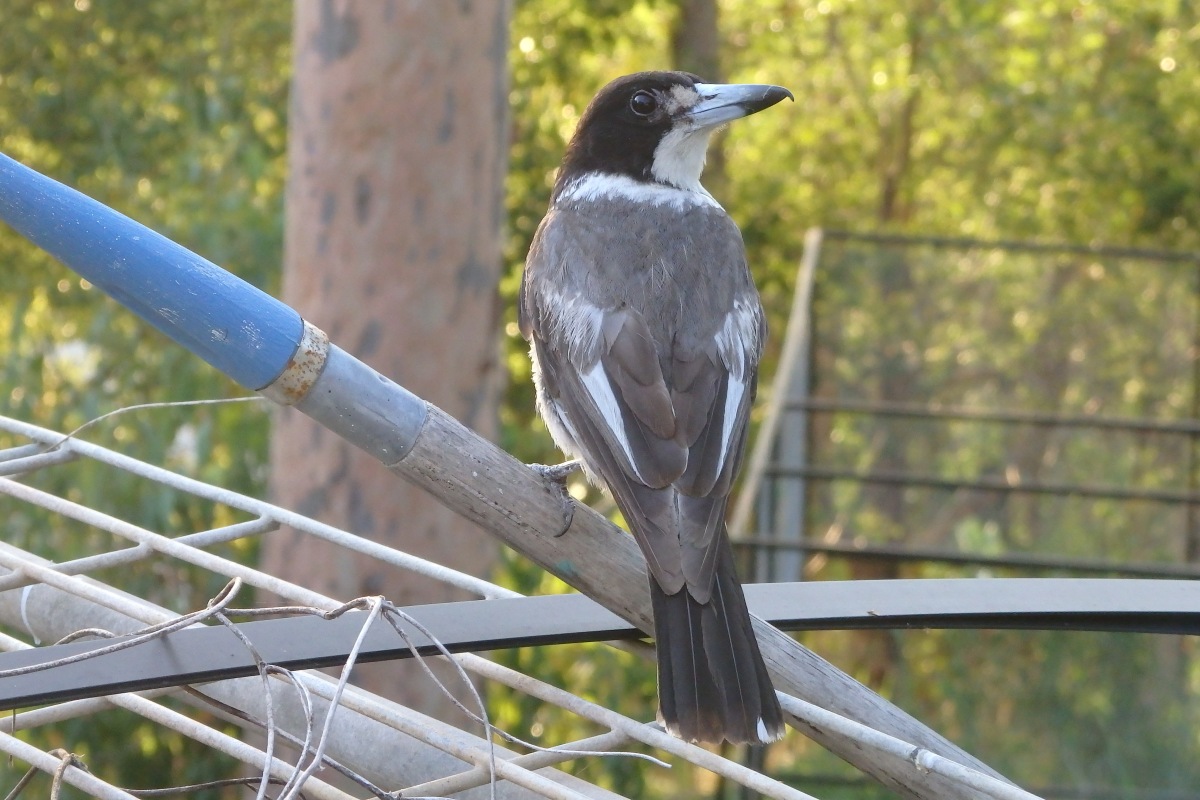 There were still plenty of Rainbow Lorikeets around during December. I thought this photo of a few of them preening looked cute!

Early in December, I managed to get this video of a baby lorikeet being fed by an adult. You can hear the high pitched sound it makes when it’s hungry. I love it when it tries to follow along the branch and puts its wings out for balance! 🙂

I have also been seeing the Scaly Breasted Lorikeets more often. They are just as zany as the rainbow loris. If you watch the short video below, you’ll see one bird look like he’s getting the other one in a headlock. Not sure if these birds are playing or fighting.

We haven’t seen or heard any crows around here for a few months, but two returned during December and they’ve been having run ins with Igor our fatherly magpie. This Torresian Crow looked particularly mean. 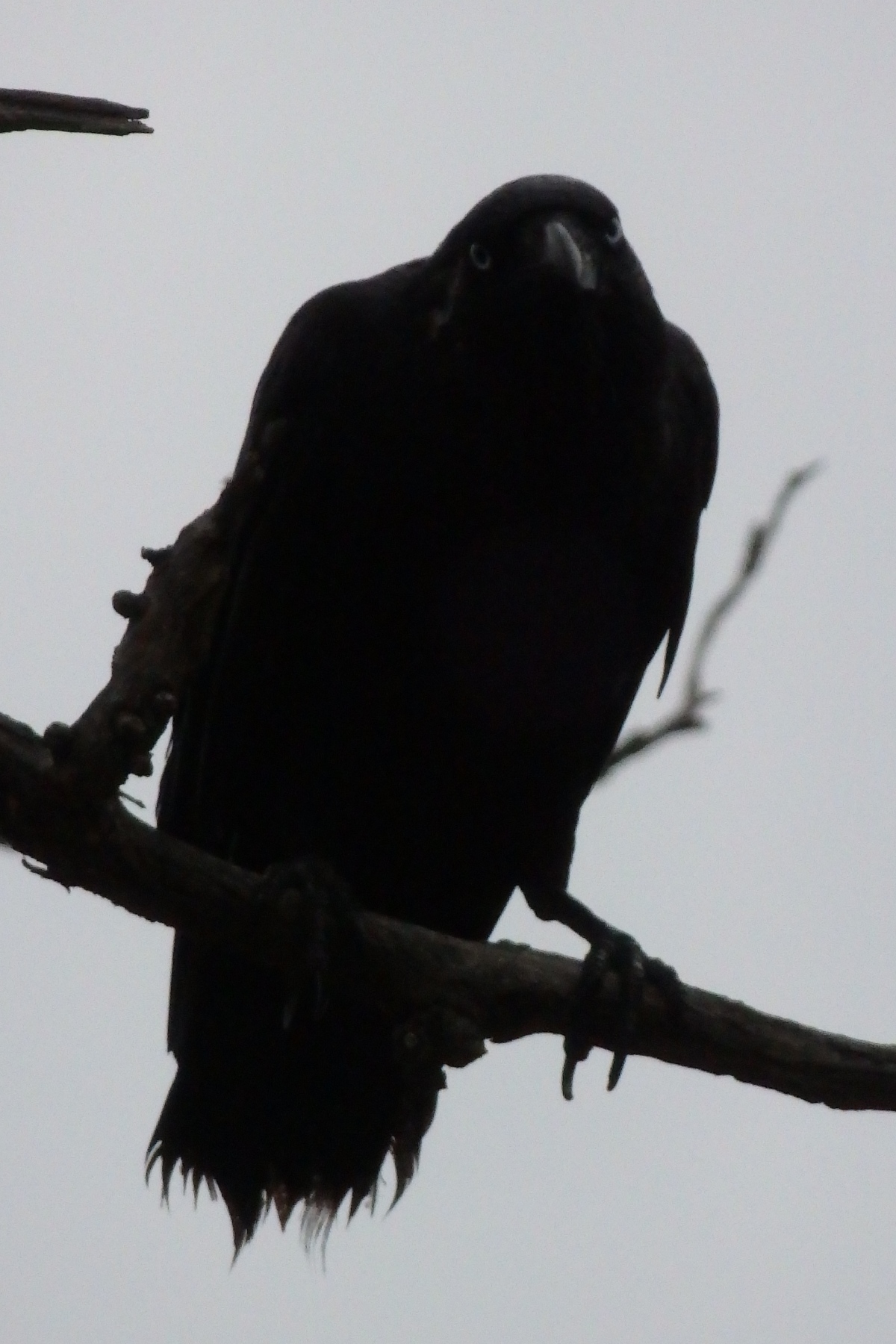 Didn’t see much in the way of butterflies all month, but I did find this beautiful Orchard Swallowtail fluttering about in the chook pen one morning. I’m sure it was glad to be let out and not become dinner for one of my girls. (You can see more of this butterfly in my earlier post here.)

There are still plenty of Brushtail Possums visiting at night, and I was surprised to see one early one morning. It’s extremely rare to see a possum during the day. You may recall that in a previous post I shared some photos of a female possum with a tongue that hangs out all the time? Well, she is still around and I discovered that she had taken to sleeping in the possum box attached to the house at the end of the veranda. It was very early in the morning, and I was putting out some food for the lorikeets when a movement caught my eye. And there was this possum, peeking through the box at me. Not sure if she was late getting home or if she was woken up by the racket of lorikeets.

A new and very welcome visitor during December were the beautiful Blue Faced Honeyeaters. They are very quick moving and didn’t stay long, so I only got a few photos. The one with the blue face is an adult, and the one with a yellow-green face is a juvenile. (You can see more about these birds in an earlier post here.) 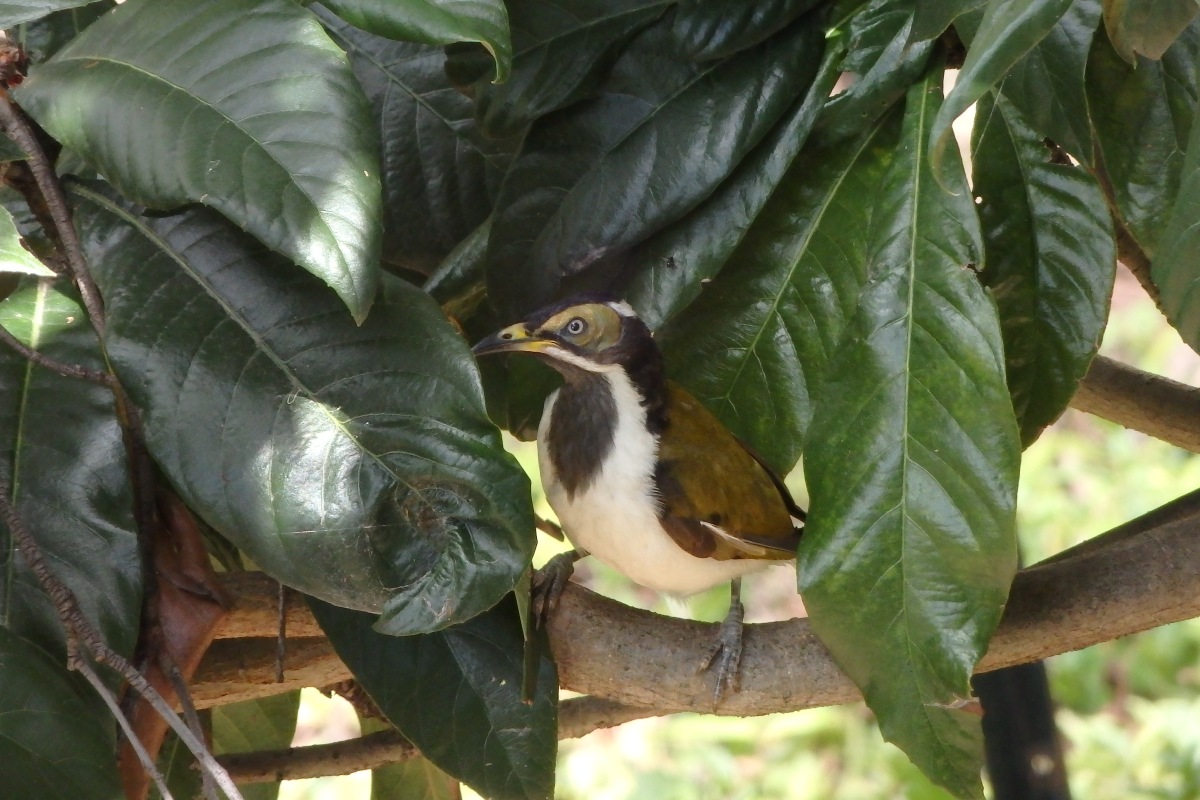 There has been an abundance of Noisy Miners during December, I think there were quite a few babies amongst them too, but I didn’t really get much in the way of photos because they’re pretty quick and flighty, although they bully the other birds. This photo shows one of the Noisy Miners in a kind of threat pose, I think. He was standing tall when I was about to take a photo, but then he suddenly went like this so I snapped a shot, and then another Noisy Miner turned up and they squawked at each other a bit and then went their separate ways.

The two Magpie babies are growing quickly. Their mother still feeds them but I noticed they are also finding and eating food on their own as well. 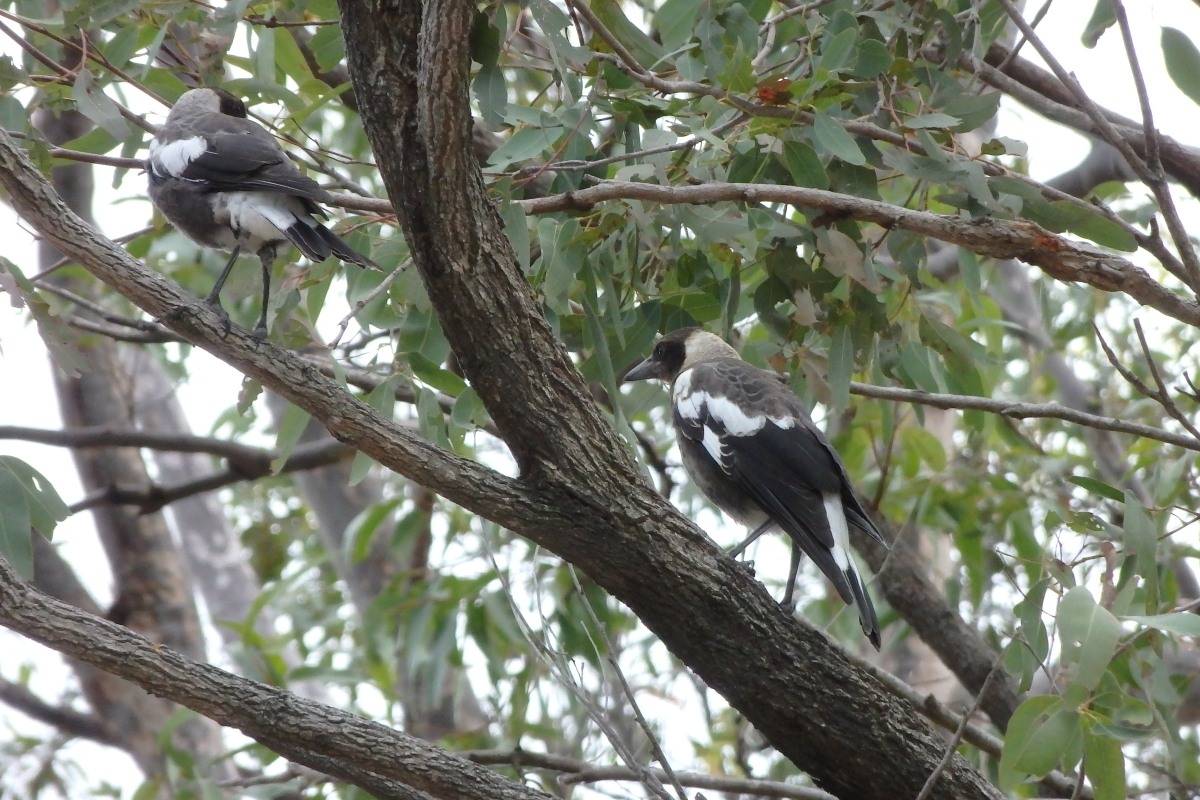 This is Maggie, their mother, who has shown them one of the water dishes, and I regularly spy the young ones taking a drink from here.

And this is Igor with one of the young ones.

Honestly, these magpies make me laugh quite often. The looks on their faces sometimes is hilarious. Look at this one I snapped recently. Baby magpies always look grumpy for some reason. 🙂 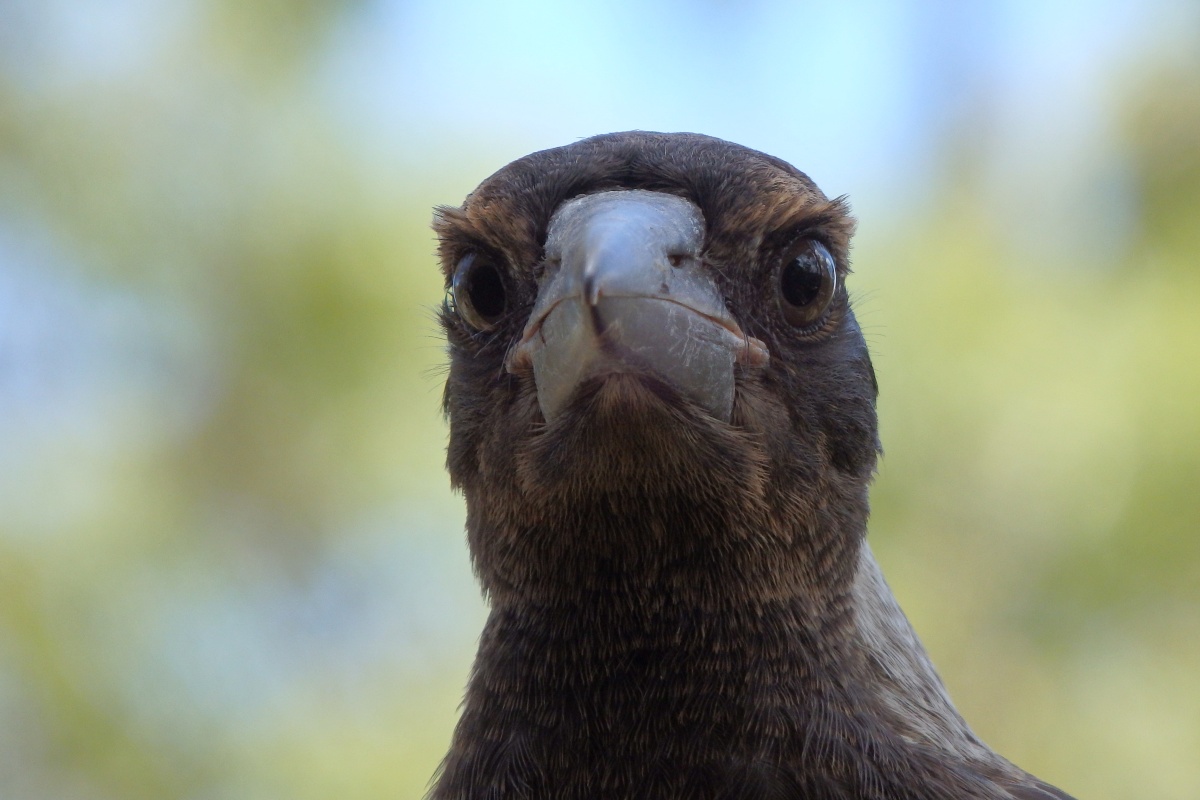 And I’ve left the best till last – the kookaburra family. Just before Christmas I saw two kookaburra fledgings, cute little balls of fluff they are. They have a very loud sound they make when they’re hungry, and at times it’s been so noisy around here with all the baby birds wanting to be fed on top of the rainbow lorikeets making a raucous, but despite that, I love it! 🙂

Here’s a photo of one of the baby kookaburras, only days out of the nest.

This is one of my first videos of a baby kookaburra where you can hear the sound it makes when it’s hungry. You can also hear one of the parents calling just close to me, and the other parent flies off in front of the young one to get more food.

And I thought I would also share this video of both parents together doing their kookaburra laugh, and one of them has a lizard in its beak ready to feed a baby.

Who knew a kookaburra could laugh with its mouth full?! 🙂

(You can see more photos and videos of the kookaburra family in my earlier post here.)

Thanks for visiting and I hope you enjoyed seeing visitors to my backyard. 🙂

9 thoughts on “Wildlife Visitors in December” 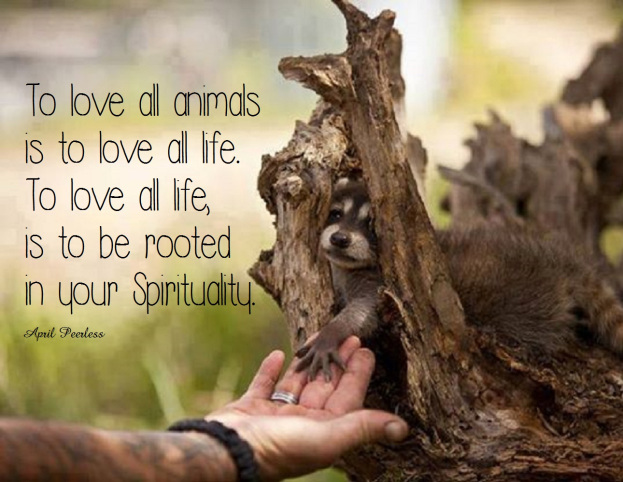 Follow My Wild Australia on WordPress.com
Join 419 other followers

Unless otherwise stated, all images, text and videos in this site are copyrighted by My Wild Australia and may not be used without written permission.